Allow us to introduce our executive team, who are responsible for the day-to-day running of the Hospice. Claire qualified as a nurse in 1995 and joined the Hospice as a Senior Staff Nurse in 2004. Her roles since then have included – Practice Development Nurse, Ward Manager and Head of Nursing. Claire studied for a BSc Hons in Palliative Care which she gained in 2011 and broadened her studies further to become an Independent Nurse prescriber in 2013. Claire was appointed Hospice Matron in October 2014, is the Registered Manager and was appointed the CEO in May 2020. Simon Henwood joined Mary Stevens Hospice team as Business Manager in 2003 after nearly 17 years in accounting practice and industry. He moved on to gain specific experience in the Charity sector including Financial Controller roles in the West Midlands for Sandwell Training Association and Providence Group Services. Historically an experienced accounting lecturer at local FE colleges and after heading up the growth in the Trading Company for over a decade he has more recently worked to integrate and head up the finance team at the Hospice. Simon has also recently been admitted to the degree of Master of Science in responsible leadership and Practise with Lancaster University. 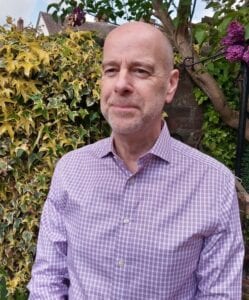 I joined Mary Stevens Hospice in January 2019, bringing with me over 15 years experience in charity retail, and 10 years in commercial retail. Charity retail is an amazing opportunity for hospices to be an accessible part of their community, allowing support through volunteering, donating goods and so raising funds for our ‘Outstanding’ hospice. Retail is a tough environment, in Trading we have a fantastic team, committed to the hospice and its success, every day is different. For myself, the desire to release the potential within that team and from the fantastic donations we receive, never wains.

From the Sahara to Stourbridge, my best job (apart from MSH obviously!) was as Expedition Leader for two years with a travel company, running overland journeys to Africa and Asia. My passion, rescue greyhounds.

Gerry Crow joined Mary Stevens Hospice in January 2015 after an extended career in the British Army where he served in a variety of roles, in numerous countries (too many to list) and on many of the well-known military operations.

Since joining the Hospice Gerry has taken full advantage of grants from the Ministry of Defence for ex-serviceman to enhance his usefulness and has gained recognised qualifications in Human Resources (CIPD Level 5 Certificate in Human Resources Management), Facilities Management (BIFM Level 3 Certificate in Facilities Management) and Data Security (EU GDPR Practitioner). More recently he has become a Mental Health First Aider.

Gerry is at his happiest when he is busy, learning new tricks/skills, helping others or travelling.

Our Board of Trustees

Chair of the Board of Trustees: Peter Marsh

Vice Chair of the Board of Trustees: John Turner BSc

Could you help to support our patients?

Just £3 pays for a patient's food for the day.