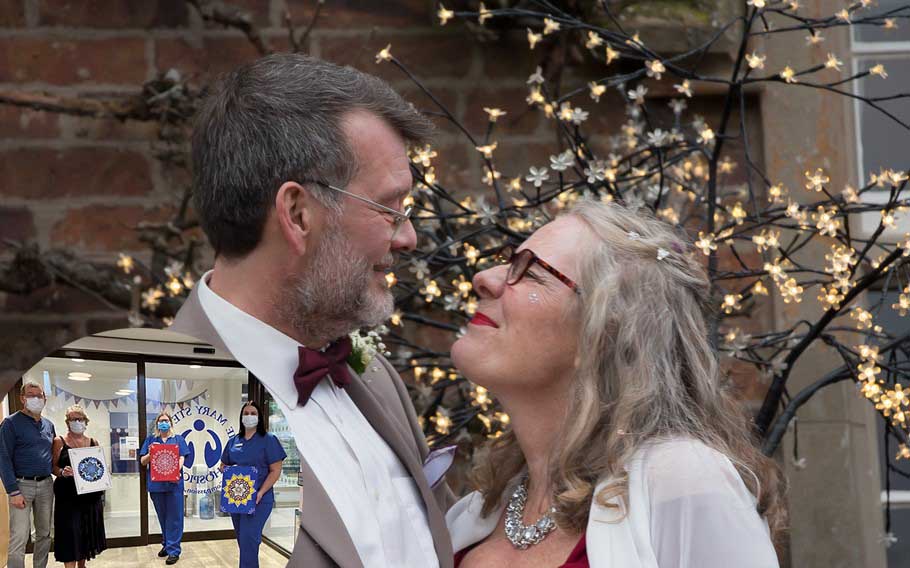 When my wife, Geri, was diagnosed with cancer in October 2019, we found that reading leaflets and researching on the internet only gave us facts about the disease and so when we asked The Mary Stevens Hospice for help, they gave us the emotional support we so badly needed, along with a friendly face and expert advice. To begin with we visited the Day Services Unit for complimentary services, mostly massage, but it also gave us the chance to talk to people who understood what we were going through. As lockdown took hold the Hospice would call us to see how we were doing and on occasion we would have doorstep visits, including from a particularly fabulous ‘South African Fairy’* who would brighten our day no end! During this time we were also able to access the medical staff for advice and guidance, which was another blessing.

Geri bravely beat her cancer twice, then she was diagnosed with a tumour in her brain. Three operations were scheduled and cancelled due to Covid-19 after which we were told no more treatment was possible. I began to receive bereavement counselling from the Hospice team which helped me to prepare for what was to come as well as give me the understanding I needed for the emotional journey ahead. After 9 weeks in hospital Geri came home to Kinver but after just 2 nights it was realised that her condition required constant personal and medical care and so she was admitted into the In-Patients Unit at the Hospice, where she received the best care. She passed away holing my hand on 12th November 2021.

I know that the care we received as a family cannot just be measured in £’s. The dedication, expertise and care given are worth far more than any monetary value. My son, Ben, also recognises the tremendous support our family received and felt the pressure of being the eldest child with all its responsibility was reduced as the Hospice became the first port of call when we needed it. Ben and I have become passionate supporters. Ben, through his work, helped to provide vehicles for the fundraising team during their January Treecycle. We both volunteered out in the vans collecting Christmas trees (we collected over 150!). It was wonderful to know that our efforts contributed towards the £30,000 raised for the Hospice. I have just taken on a new role as a volunteer blue box collector, collecting and replacing donation boxes on behalf of the Hospice, a really worthwhile use of my spare time. We cannot change what happened to Geri, but we want to give back to the Hospice for the care, compassion and kindness we received at such a difficult time and so that others can receive the same care should they ever need to.

*Our social worker, Esther, continues to support patients, their families and carers both at the Hospice and in their own homes. Artwork created by Geri is proudly displayed on the walls of the Hospice.