The annual charity football match between Legends teams from West Bromwich Albion and Stourbridge FC has raised more than £20,000 for patients at the Mary Stevens Hospice 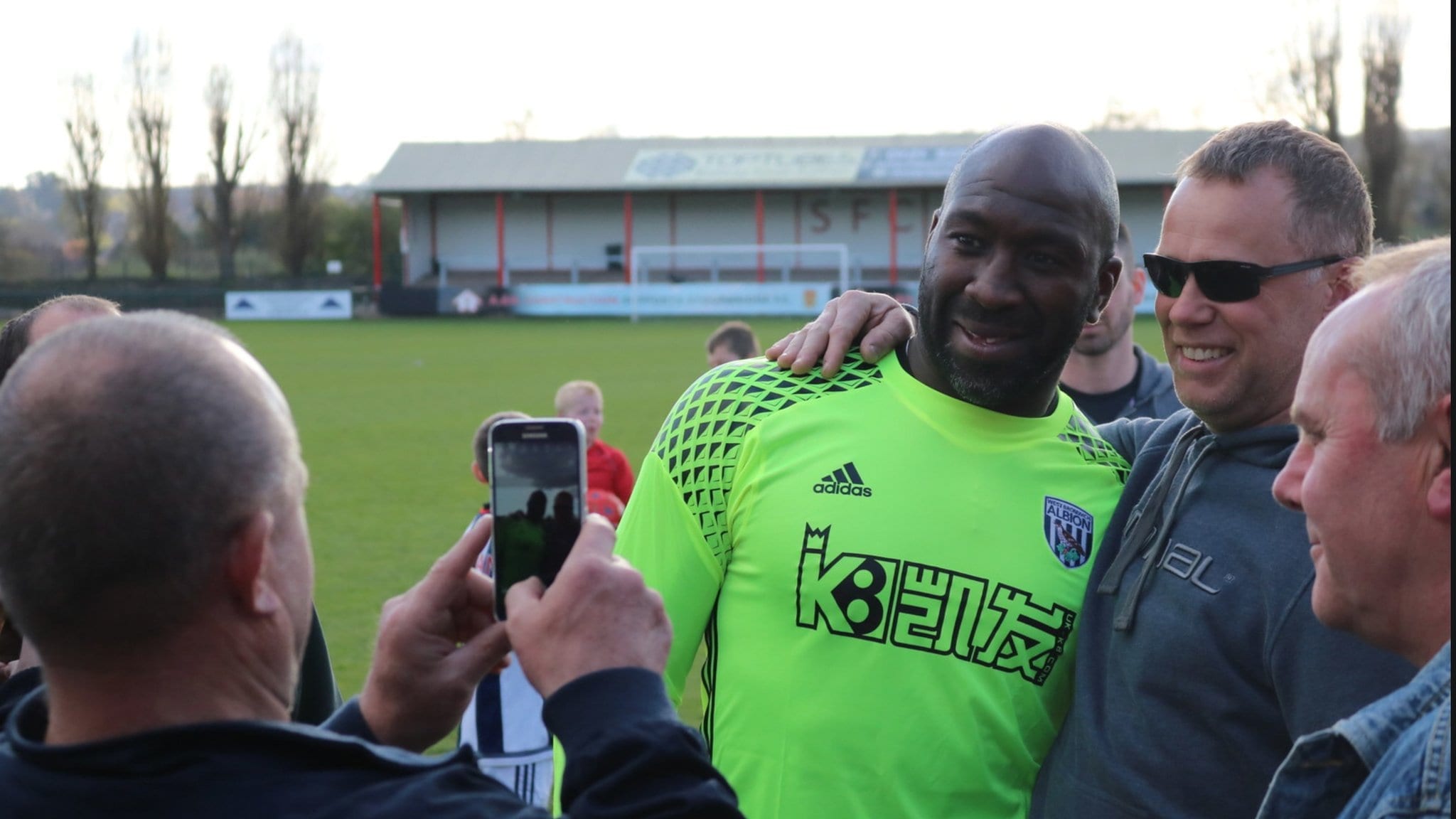 The annual Jane Webb Memorial Trophy charity football match has raised more than £20,000 for the Hospice!

The game was played at Stourbridge’s War Memorial Athletic Ground in front of record crowds as the teams competed for the Jane Webb Memorial Trophy, named in remembrance of the local woman who provides the motivation for the game each year.

The day also included a huge family fun day, a sporting auction, and the opportunity for local children to have an once-in-a-lifetime matchday experience, as mascots, ball-children or flag-bearers.

Crowds were also treated to a mascot assault course sponsored by Midcalf Nicholls, with characters from the likes of West Bromwich Albion, Wolverhampton Wanderers, Toys ‘R’ Us, The Tenth Lock and Mommy’s Mascots taking part in a chaotic obstacle course, which saw Baggie Bird steal an unlikely, late victory.

After raising £15,000 in its debut year in 2016, event co-founders Matt Webb & Mark Naylor had hoped they would beat last year’s sum but confessed that they found themselves “absolutely amazed” by the support the football match received this year from supporters, players and volunteers.

In total, more than 40 players took part in the day, including 15 former-pros such as Darren “Big Dave” Moore, Richard Sneekes, Nigel Quashie, Geoff Horsfield and Des Lyttle. Darren Moore has now captained the WBA side for two years in a row, and delighted fans by playing in goal for 15 minutes at the end of the second half, before running the length of the pitch to take and score a penalty.

West Bromwich Albion ran out 6-4 winners in a hotly-contested match under the sweltering April sun, with fans taking to Facebook and Twitter afterwards to comment how much they’d enjoyed the day.

The Mayor of Dudley was also on hand to meet the children involved in the day and to chat to players before kick-off, alongside the Hospice CEO, Captain Stevan Jackson.

“It really is just still sinking in.

When you look around, and all you can see is just hundreds of families enjoying the day it brings it all home. Honestly, there’s no feeling like it.

I can’t tell everyone involved how grateful I am for making the day possible, and thank you so much to the thousands of people who came along and supported the match, I hope they all enjoyed it and we can’t wait to go again. We’ve got a trophy to win back!”

“I don’t think I’ve ever experienced anything like that. To have such overwhelming support from the local community, the clubs, the charities and everyone else involved was absolutely incredible and the end result of all of that hard work was a day that we’ll never forget.

A lot of the lads have already signed up to be there again next year, so we’re confident of retaining our title and can’t wait to do it all again!”

“Matt and Mark simply can’t be praised highly enough for what they’ve done. It’s not just the fact that they’ve paid for so many families to receive our care when they need it most, it’s the day they create for the community.

They bring people together to simply enjoy being together as a family and watch absolute superstars roll back the years. The work that has gone into this event has been absolutely huge, and to see it all come together in the way it did was just so special.

So we’d like to say thank you to the supporters who turned up in their thousands, the volunteers who make days like this possible, the staff who have worked so hard, West Bromwich Albion and Stourbridge for being so, so supportive of the event and, maybe most importantly, Jane Webb for raising such an incredibly kind-hearted man. She also took care of the weather, which was more than we could ever have asked.”

In the midst of everything going on, on the day, the thousands in attendance also perfectly observed a minute’s silence before kick-off, to pay their respects to the Wilkinson family whose devastating loss has shocked the town this week. All involved in the organisation of this event would like those effected to know that their hearts and thoughts are with them at “this impossibly difficult time”.